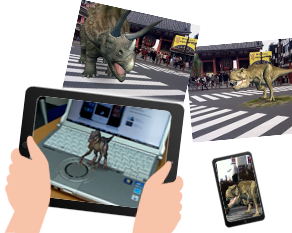 ※Please click a picture, when you cannot read QR Code. A large picture is displayed.

By making use of AR( Augmented Realitty ) let the ancient dinosaurs appear in various scenes taken by camera as if they are alive. You can proudly put such scenes in uploaded blogs, facebook and twitters.

《IMPORTANT NOTICE》
1）Free of charge at first dinosaur. But you will be charged from second dinosaur on.
2）Impossible to have dinosaur appeared more than two at a time.

《CAUTION》
Pay full attention around you while in playing. In addition, please be noted that we take no responsibility for any damages caused by your careless handling.

・For reaction, touch the dinosaur lightly.

Explanation of each button.

You can contribute a photograph here!

※Sorry, but I will not be accepted by telephone.